PASADENA, Calif. -- Color and black-and-white images of Earth taken by two NASA interplanetary spacecraft on July 19 show our planet and its moon as bright beacons from millions of miles away in space. NASA's Cassini spacecraft captured the color images of Earth and the moon from its perch in the Saturn system nearly 900 million miles (1.5 billion kilometers) away. MESSENGER, the first probe to orbit Mercury, took a black-and-white image from a distance of 61 million miles (98 million kilometers) as part of a campaign to search for natural satellites of the planet. 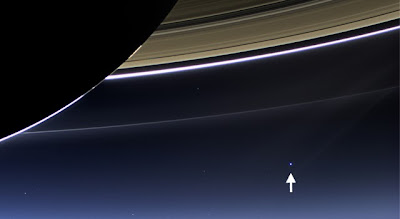