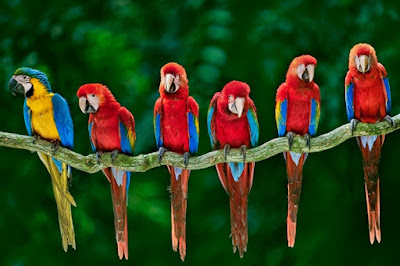 Scarlet macaws are tropical birds, but their bones
have been found in the southwestern United States


Birds were spiritual emblems in pueblos of the southwestern United States and northern Mexico.

To ancient peoples of the American Southwest, a macaw’s brilliant feathers weren’t just adornments. They were status symbols and spiritual emblems — so precious, in fact, that macaws were kept in captivity and deliberately plucked of their plumage, new evidence suggests.

Macaw skeletons from three prehistoric pueblos in New Mexico bear signs of feather harvesting, according to analysis presented on 31 March at a meeting of the Society for American Archaeology in Vancouver, Canada. But the skeletons also hint that the macaws’ handlers went to great lengths to care for their demanding charges. “People were doing their utmost to keep them alive,” says Randee Fladeboe, an archaeologist at the University of Florida in Gainesville who analysed the macaw bones.

Archaeologists studying the ancient Native Americans called the Puebloans and nearby groups have found macaw bones and feathers dating from ad 300 to ad 1450 at sites ranging from Utah in the American Southwest to Chihuahua in Mexico. It is likely that many of these birds were imported; there is scanty evidence of macaw breeding, except at one Mexican site, and many macaws are tropical. The highly prized scarlet macaw (Ara macao), for example, lives at least 500 kilometres to the southeast.

Fladeboe examined the wing bones of 17 scarlet and military macaws (Ara militaris) from three pueblos. Fifteen of the birds had small bumps marring the upper surfaces of their wing bones.

A macaw’s flight feathers are rooted in the bone, so pulling them out can cause bleeding and infection, Fladeboe says. Multiple infections, or a combination of infection and malnutrition, lead to bumps like those on the skeletons. Macaws do sometimes yank out their own feathers, but the ancient bones show traces of multiple feather loss along their entire lengths and on both right and left wings. To Fladeboe, it seems unlikely that 15 of the 17 macaws she studied would strip themselves so methodically.

One macaw had suffered two broken wings, and its beak bore signs of attacks from other macaws. Its bones also show irregularities from either malnutrition or illness. This macaw probably would not have survived without hand-feeding and protection, Fladeboe says.

Fladeboe makes a “good preliminary case” that the birds were plucked by humans, says zooarchaeologist Erin Keenan Early at Texas State University in San Marcos, who thinks the evidence that the birds were well cared for is also credible. Fladeboe plans to do computerized tomography scanning of the bones to confirm her early results.

Macaws that were stressed by captivity and feather removal may have engaged in “self-destructive and otherwise aggressive behavior, making them quite difficult to care for”, says zooarchaeologist Meredith Wismer of the University of Iowa in Iowa City. Fladeboe thinks that the birds’ caretakers probably learned to soothe the macaws; happy macaws have more attractive feathers.

Few sites had more macaws than Chaco Canyon, a cluster of settlements in New Mexico. Chaco’s Pueblo Bonito even had what seems to be an aviary, complete with a layer of guano 25 centimetres thick. A radiocarbon analysis demonstrated that macaws were living there in the late 1000s and early 1100s, even as the pueblo was heading towards collapse.

Earlier research had shown that birds were imported to the pueblo when it was flourishing1. But seemingly the pueblo’s access to macaws “continued throughout the rise and decline of Chaco”, illustrating the birds’ importance, says archaeologist Adam Watson of the American Museum of Natural History in New York City, who presented the new dates at the meeting on 30 March.

Macaw keepers at places such as Chaco Canyon clearly had to go to great lengths to procure the water and food the birds needed, Fladeboe says. To ancient Southwestern peoples, the macaws served a role befitting their powers as ambassadors to the underworld and bringers of rain. The macaws’ caretakers “did obviously care for the birds”, she says. “To say that they only cared about them [for] their feather output would be to do them a disservice.”