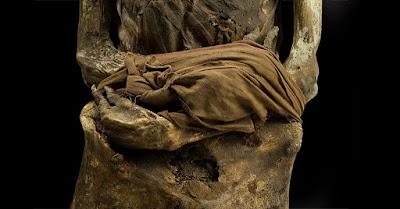 Alison Abbott
NATURE doi: 10.1038/d41586-018-06799-y
24 September 2018
Mummies: Secrets of Life Reiss Engelhorn Museum, Mannheim, Germany Until 31 March 2019
She is known as the ‘woman with crossed legs’: the remains of a Peruvian who died around 600 years ago. As with many mummies from that part of the world, her arms are crossed, too. Unusually, her hands are clasped. Thanks to research by the German Mummy Project, we now know what she was holding — not precious jewels, but a child’s milk teeth.

This mummy is displayed with more than 50 others from around the world in a startling new exhibition at the Reiss Engelhorn Museum in Mannheim, Germany. Mummies: Secrets of Life is built around the science that has been applied to the mummies, and what it has revealed about long-forgotten lives and deaths.

The German Mummy Project is an international research initiative launched in 2004, after 19 wrapped and preserved bodies from South America were discovered in unmarked crates in the museum’s basement during a renovation. They had been hurriedly stashed and moved to safety during Allied bombing in the Second World War; in the post-war chaos, their return was overlooked.

Since their rediscovery, researchers from several European countries have collaborated in examining them, along with more than 100 mummies of different origins held in a number of collections. They have used carbon dating, genetic analysis and cutting-edge radiology, among other technologies, to reveal clues about individuals who lived hundreds, sometimes thousands, of years ago.

There are many ways to mummify, or to become mummified, as the exhibition shows. Bodies left in a desert quickly dry out. Bitter cold has a similar effect, as shown by the 5,400-year-old ‘Iceman’ Ötzi, found high in the Italian Alps. Bogs provide anaerobic environments that halt decay: an acid bog preserves skin but dissolves bones; an alkaline one does the opposite. Some civilizations, notably the ancient Egyptians, used chemicals to help slow the breakdown of a corpse with, say, salts and resin. Later, people used mixtures containing formalin. Today, anatomist Gunther von Hagens and his controversial Body Worlds exhibitions have popularized the plastination process that replaces water and fat in tissue with polymers.

Among the most extensively studied of the rediscoveries are the remains of a woman with two small children, one laid on her stomach. Anthropologists had assumed that the child had been placed there relatively recently, because its binding cloth seemed much fresher in colour than those of the other bodies. But carbon dating and computerized tomography (CT) scans showed that all three dated to the medieval period, before Europeans entered South America; that the woman probably died in her early thirties; and that the children were toddlers. A sample from the woman’s intestine showed traces of the bacterium Helicobacter pylori, which causes gastric diseases, and arracacha, an Andean root vegetable.

In July, the team found that the younger child had an over-expanded chest and a blockage in her windpipe, indicating that she probably choked to death. A sample of the foreign material is now undergoing histological and molecular analysis at the Institute for Mummy Studies in Bolzano, Italy (the city in which Ötzi rests). Institute director Albert Zink says that identification should be completed in time to update the exhibition before it ends.

The team has identified plausible causes of death in other remains. A CT scan of a middle-aged man from Egypt who died around 2,000 years ago, for instance, indicated a probable tumour of the pituitary gland, which typically leads to excess secretion of growth hormone. The scan showed the thickened facial features and enlarged hands and feet typical of the disorder.

A South American Inca mummy bundle in warrior costume, housed in the Museum of Cultures in Basel, Switzerland, had been a mystery since the 1970s, when an X-ray scan revealed a mummy resembling a woman. Now, a CT scan has revealed that it is actually a small boy around seven to nine years old, his head and spinal cord dotted with tumours. The wrapping was probably an early twentieth-century manipulation by traders looking for a higher price, the team speculates.

This finely curated exhibition, which provides information in German and English, and includes presentations of some of the technologies used, is packed with other curiosities. There are, for instance, the naturally mummified 200-year-old corpses from a collection discovered in 1994, again during renovation works, in the crypt of a church in Vác, Hungary. A special microclimate aided the mummification process. The remains were laid in pine coffins, cushioned with wood chips that might have released turpentine to inhibit fungal and bacterial growth. There are also entwined bog bodies from the Netherlands. They were not lovers, as was once assumed: scientific examination shows that they were two men who died 2,000 years ago, and happened to roll into each other in their swampy graves.

On display, too, is the first-ever X-ray of a mummy, taken in Frankfurt in 1896, just months after Wilhelm Röntgen first produced and detected the electromagnetic radiation. It hangs alongside a modern CT scan of the same remains, and the mummy itself. Particularly startling is a 3D digital facial reconstruction based on a 500-year-old Peruvian female mummy. Looking at her smooth skin and dark hair, I was moved by her fate: she died too young, I thought.

Ötzi is physically absent, but the lack is balanced by an elegant, intuitive interactive display on the mass of data that researchers have gleaned about him. The Iceman is among the oldest mummies ever discovered, and his virtual presence completes an exhibition that spans many times and places.