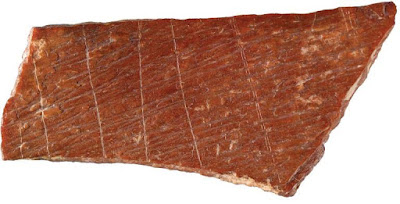 About the size of a thumb, this engraved bone fragment is one
in a pair recently unearthed in eastern China. The etchings push back
the date of such abstract carvings in this region by tens of thousands of years.

More than a hundred thousand years ago in what is now eastern China, an ancient human relative decided to carve a bit of bone. Surrounded by the fragmented skeletons of butchered animals, the ancient engraver chose a tidbit of rib hardened from its time under the sun and carved seven nearly parallel lines, highlighting them with a smear of vibrant ochre pigments.

Now, these straight lines are making waves among paleoanthropologists, who believe that this tiny fragment, along with a second engraved bone found nearby, provide the oldest evidence of intentional symbolic carvings yet found in East Asia. If so, the find would beat the previous record holder by some 60,000 years, the team reports in the journal Antiquity.

The branch of the human family tree to which the artist belongs remains shrouded in time. But fossil skulls from an unknown species found near the bones hint that the carvings were not the handiwork of our species, Homo sapiens.

“Archaeological digs are full of mystery; you never know what you're going to discover,” study author Zhanyang Li of Shandong University says in an email. “A small object invisible to the eye can change people's understanding.”

While we’re far from understanding the purpose behind the newly described lines, or whether they are truly symbols, the deliberateness of their creation underscores the complexity of our ancient relatives’ behaviors and interactions with the natural world. The work also continues to challenge the outdated notion that modern humans were the only hominins with the cognitive capacity to think abstractly.
"It is really exciting work," says archaeologist Leslie Van Gelder of Walden University in Minneapolis. “We don’t have to know what it means, we just have to know that to the people making it, it meant something.”