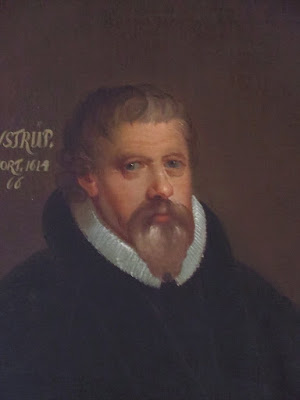 Bishop Peder Winstrup of Lund, Sweden passed away in the winter of 1679 at the age of 74 and was interred in a crypt at Lund Cathedral. Three centuries later, his astonishingly well-preserved remains provide insights to the origins of tuberculosis.

In a recent study published in Genome Biology, researchers from the Max Planck Institute for the Science of Human History, Lund University and the Swedish Natural Historical Museum present analysis of the highest quality ancient Mycobacterium tuberculosis genome to date, suggesting the pathogen is much younger than previously believed.

When Anthropologist Caroline Arcini and her colleagues at the Swedish Natural Historical Museum discovered small calcifications in the extremely well preserved lungs of Bishop Peder Winstrup, they knew more investigation was needed. “We suspected these were remnants of a past lung infection,” says Arcini, “and tuberculosis was at the top of our list of candidates. DNA analysis was the best way to prove it.”

Up to one quarter of the world’s population is suspected to have been exposed to bacteria of the Mycobacterium tuberculosis complex, which cause tuberculosis (TB). Bishop Winstrup would have been one of many to fall ill during the onset of the so-called “White Plague” TB pandemic that ravaged post-medieval Europe. Today, TB is among the most prevalent diseases, accounting for the highest worldwide mortality from a bacterial infection.

The global distribution of TB has led to the prevailing assumption that the pathogen evolved early in human history and reached its global distribution via the hallmark Out of Africa human migrations tens of thousands of years ago, but recent work on ancient TB genomes has stirred up controversy over when this host-pathogen relationship began. In 2014, a team led by scientists from the University of Tübingen and Arizona State University reconstructed three ancient TB genomes from pre-contact South America – not only were the ancient strains unexpectedly related to those circulating in present-day seals, but comparison against a large number of human strains suggested that TB emerged within the last 6000 years. Understandably, skepticism surrounded this new estimate since it was based entirely on ancient genomes that are not representative of the TB strains associated with humans today.

“Discovery of the Bishop’s lung calcification gave us the opportunity to revisit the question of tuberculosis emergence with data from an ancient European,” comments Kirsten Bos, group leader for Molecular Paleopathology at the Max Planck Institute for the Science of Human History (MPI-SHH), who co-led the study. “If we could reconstruct a TB genome from Bishop Winstrup, where we know his date of death to the day, it would give a secure and independent calibration for our estimates of how old TB, as we know it, actually is.”

In a new study published this week in Genome Biology, Susanna Sabin of MPI-SHH and colleagues reconstruct a tuberculosis genome from the calcified nodule discovered in Bishop Winstrup's remains.

“The genome is of incredible quality – preservation on this scale is extremely rare in ancient DNA,” comments Bos.

“A more recent emergence of the tuberculosis pathogen complex is now supported by genetic evidence from multiple geographic regions and time periods,” comments Sabin, first author of the study. “It’s the strongest evidence available to date for this emergence having been a Neolithic phenomenon.”

This most recent shift in the narrative for when bacteria in the Mycobacterium tuberculosis complex became highly infectious to humans raises further questions about the context of its emergence, as it appears to have coincided with the rise of pastoralism and sedentary lifestyles.

“The Neolithic transition seems to have played an important role for the emergence of a number of human pathogens,” comments Denise Kühnert, group leader for disease transmission research at MPI-SHH who co-led the investigation.

“For TB in particular, stronger evidence could only come from an older genome, though these deeper time periods are unlikely to yield preservation on the scale of what we’ve seen for Bishop Winstrup,” adds Bos.

“Moving forward,” Sabin further comments, “the hope is we will find adequately preserved DNA from time periods close to the emergence of the complex, or perhaps from its ancestor.”