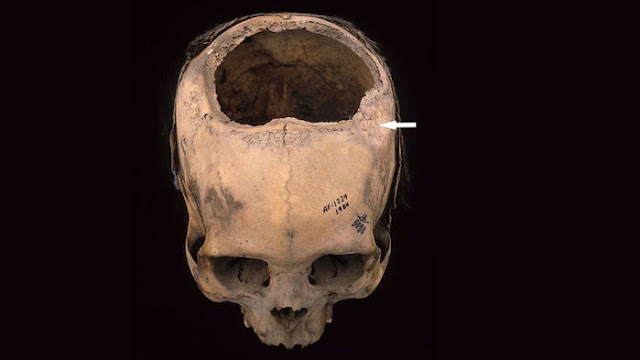 This unfortunate individual, who lived in Peru between 400 and 200 B.C.E.,
suffered a skull fracture (white arrow) that was likely treated with trepanation,
but died less than 2 weeks later. D. Kushner et al., World Neurosurgery 114, 245 (2018)

Cranial surgery without modern anesthesia and antibiotics may sound like a death sentence. But trepanation—the act of drilling, cutting, or scraping a hole in the skull for medical reasons—was practiced for thousands of years from ancient Greece to pre-Columbian Peru. Not every patient survived. But many did, including more than 100 subjects of the Inca Empire. A new study of their skulls and hundreds of others from pre-Columbian Peru suggests the success rates of premodern surgeons there was shockingly high: up to 80% during the Inca era, compared with just 50% during the American Civil War some 400 years later.

Trepanation likely started as a treatment for head wounds, says David Kushner, a neurologist at the University of Miami in Florida. After a traumatic injury, such surgery would have cleaned up skull fractures and relieved pressure on the brain, which commonly swells and accumulates fluid after a blow to the head. But not all trepanned skulls show signs of head injuries, so it’s possible the surgery was also used to treat conditions that left no skeletal trace, such as chronic headaches or mental illnesses. Trepanned skulls have been found all over the world, but Peru, with its dry climate and excellent preservation conditions, boasts hundreds of them.

For the new study, Kushner teamed up with John Verano, a bioarchaeologist at Tulane University in New Orleans, Louisiana, and Anne Titelbaum, a bioarchaeologist at the University of Arizona in Phoenix, to systematically study trepanation’s success rate across different cultures and time periods. The team examined 59 skulls from Peru’s southern coast dated to between 400 B.C.E. to 200 B.C.E, 421 from Peru’s central highlands dated from 1000 C.E. to 1400 C.E., and 160 from the highlands around Cusco, capital of the Inca Empire, from the early 1400s C.E. to the mid-1500s C.E. If the bone around the surgical hole showed no signs of healing, the researchers knew the patient died either during or very shortly after the surgery. Smooth bone around the opening showed that the patient had survived for months or years after the procedure.