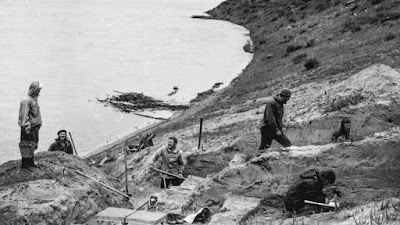 A new study has revealed the oldest link yet between Native Americans and their ancestors in East Asia: a 14,000-year-old tooth belonging to a close cousin of today’s Native Americans, found thousands of kilometers from the landmass that once connected Eurasia and the Americas.

“It’s very cool,” says Jennifer Raff, a geneticist at the University of Kansas, Lawrence, who studies the peopling of the Americas. The work suggests the Siberian ancestors of North America’s Indigenous peoples were more widespread and mobile than previously believed, she says. It may also indirectly support the hypothesis that Native Americans’ ancestors became isolated from their Asian forebears on Beringia, an ancient land bridge that connected Siberia to Alaska.

Sometime about 20,000 years ago, people began to cross the eastern tip of Siberia onto Beringia. Exactly where they lived and roamed in Siberia before that, however, has long been a mystery.

The new study provides the oldest evidence yet of a close genetic ancestor to Native Americans in Eurasia. It’s also much farther from Beringia that many would have suspected, says the study’s senior author, Johannes Krause, an archaeogeneticist and director of the Max Planck Institute (MPI) for the Science of Human History. In the 1970s, Russian archaeologists excavated a site called Ust-Kyakhta sandwiched between the southern banks of Lake Baikal and the Mongolian border in south-central Russia. They recovered thousands of stone and bone tools, ceramics, and reindeer and fish bones—plus a sliver of a human tooth.

The tooth sat in a collections drawer for decades, until Svetlana Shnaider, an archaeologist at the Russian Academy of Sciences, brought it to the attention of ancient DNA experts at MPI. “Initially I was quite skeptical” that it could still contain DNA, Krause says.

But Siberia’s cold, dry environment favors DNA preservation, and the team succeeded in sequencing the tooth bearer’s genome from dental pulp. Based on radiocarbon dates of charcoal and bones found alongside the tooth, researchers calculated it to be about 14,000 years old. The genome showed the individual was a man—one who shared the same distinctive mixture of East Asian and Eurasian ancestry as today’s Native Americans. That makes him the oldest known close relative of Native Americans outside the Americas, the researchers report today in Cell.

That impressive range, in turn, implies that the group directly ancestral to Native Americans became genetically isolated in Beringia, not in Siberia, where they had been moving around for thousands of years, Raff says. Today, the people near Lake Baikal have virtually none of the genetic hallmarks of that older population, indicating it was replaced by migrants of primarily northeast Asian ancestry about 10,000 years ago.

People around Lake Baikal continued to move around and interact with other groups for thousands of years, according to additional findings in the paper. Two of them, buried side by side about 4200 years ago, bore the DNA signature of the plague-causing bacteria Yersinia pestis, which until now had only been found much farther west, in people with a genetic connection to the Eurasian steppe.

“That [the bacterium] moved all the way from the Baltic to the Baikal over more or less 100 years is a bit of a surprise,” Krause says. “Today, we see something like coronavirus that went everywhere within 3 months, but the Bronze Age was not such a globalized world.”

The combination of both human and pathogen ancient DNA offers a rare historical window into a place critical to understanding Native American, Asian, and European genetics, says Priya Moorjani, a geneticist at the University of California, Berkeley. “Every sample thus far from this region has helped to refine our understanding of human history and evolution.”