How Dangerous Are Cassowaries, Really?

CASSOWARIES HAVE QUITE THE REPUTATION.
BUT IS IT DESERVED? WELL, NO—BUT ALSO YES 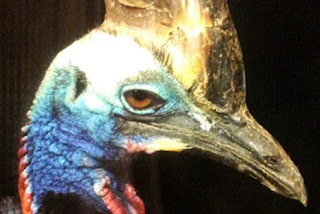 Fuente: Tetrapod Zoology. Amphibians, reptiles, birds and mammals - living and extinct
http://blogs.scientificamerican.com/tetrapod-zoology/
Today, it’s time to revisit the Tet Zoo archives, and post this (now very old) section of text on cassowaries. It first appeared here (at Tet Zoo ver 2) back in May 2007. I haven’t finished on the Mesozoic maniraptorans, by the way (for parts published so far see part 1, part 2, part 3).

It’s well known that cassowaries can be dangerous, and indeed together with ostriches [UPDATE: and chickens] they are the only birds known to have definitely killed humans*. On mainland Australia, the most recent recorded fatality occurred in April 1926 when 16-year-old Phillip McClean received an injury to the throat after running from a cassowary and falling to the ground. I've also encountered references to the death of a zookeeper named Luke James who was apparently killed by a captive cassowary, but have only read about this online and am not sure as to its reliability (readers: please let me know if have access to any further information on this case).