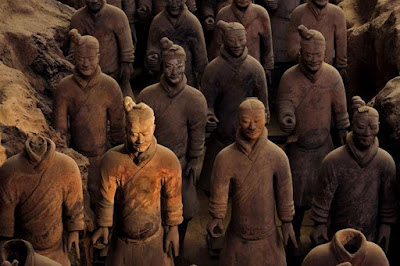 The terracotta army was created to serve China's first emperor in the afterlife.


If your bathroom faucets look like shiny silver, they’re likely chrome plated. Experiments with this anti-rust technology began in Europe in the 19th century. Yet for 40 years, an alternate theory has circulated in scholarly circles and the popular media: Chrome plating was invented in the third century B.C in China and used to prevent the bronze weapons buried with the Terracotta Army in Emperor Qin’s tomb from corroding. The claim is even on a plaque at the site’s museum in Xi’an.

This theory dates to the 1970s, the decade when the World Heritage site was first discovered. After early excavation reports suggested a surface treatment could explain the exquisite preservation of the 2,200-year-old bronze weapons, Chinese scientists used a then-pioneering analysis called compositional mapping to reveal a layer of chromium on a small sample of the weapons. The researchers suggested the weapons could’ve been dipped in a chromium oxide solution, a method known as chromate conversion coating—a technique technically different from modern chrome plating, which involves chromium metal.

Either technique would’ve been revolutionary more than two millennia ago during the Qin dynasty. But it turns out neither was used on the weapons, according to a paper published today in the journal Scientific Reports.

The researchers, from University College London and the Emperor Qin Shihuang’s Mausoleum Site Museum, studied 464 bronze arrowheads and tangs, ferrules, sword blades and fittings, and bow triggers using SEM-EDS, a high-powered microscope that reveals the surface and structure of a metal, and portable X-ray fluorescence, which reveals chemical composition.

The large sample size allowed them to see where chromium appears—and where it doesn't.

It’s common where the metal would’ve connected to wood and bamboo handles, shafts, fittings, and fasteners, which would’ve been lacquered and then painted. It was generally absent on the best-preserved parts of the bronzes. Further analysis revealed that the lacquer was actually the source of the chromium detected by earlier researchers.
A study of the site soil yielded more clues: It’s alkaline and finely grained, which limit aeration and organic growth—all factors that can contribute to the stability of metal objects over time. The upshot? The chromium came from the lacquer, and the preservation came from the dirt.

W. Thomas Chase, a conservation expert in Chinese bronze technology, says that “[the] team has done a wonderful job in disproving the chromium-plating theory and an offering a viable alternate explanation.” The study’s analyses of multiple materials—metal, lacquer, and soil—he adds, “are exactly what is necessary to help us understand long-term corrosion and preservation of metal artifacts."

Robert Murowchick, associate director of Boston University’s Center for the Study of Asia, says that the original chromium idea was a reasonable theory for people to have embraced for so long. “It was not a wild idea to suggest that Qin workshops intentionally treated their bronzes with chromium to prevent corrosion.”

It would have been an attractive explanation to both scholars and the public,” Murowchick observes, “as it suggested a nice parallel to the stories passed down by early Chinese historians about the First Emperor of Qin's fascination—perhaps obsession—with discovering an elixir of immortality for himself.”

Lead study author Marcos Martinon-Torres, now at Cambridge University, admits he was surprised by the findings, calling the 1970s research “remarkably convincing. They did experimental replications. They ruled out other hypotheses. I was certainly inclined to believe they were right.”