How Did Whales Reach the Americas? A Four-Legged Fossil Offers New Clues 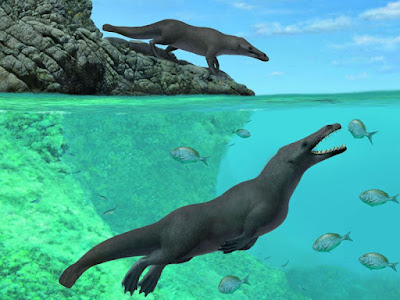 Dubbed Peregocetus pacificus, the newly-described species was adapted to life both in and out of the water
he story of modern whales begins around 50 million years ago, in what is today India and Pakistan, with four-legged hoofed mammals about the size of a wolf. As whales’ ancient ancestors became increasingly adapted to aquatic environments, they dispersed to North Africa and then to the Americas, eventually losing their hind legs and gaining flippers. But due to fragmentary fossil evidence, the outlines of this journey are fuzzy. Scientists are not entirely sure when these early whales migrated, what route they took, or how they adapted along the way.

As Leila Miller reports for the Los Angeles Times, a newly-described, four-legged whale fossil from Peru is helping fill in some of these gaps. Discovered in 2011 in Peru’s Pisco Basin, the fossil dates to 43 million years ago and points to a creature that stretched about 13 feet long and had four legs strong enough to support its weight on land. The whale also had a robust tail, which it likely used to move through water. Writing in the journal Current Biology, an international team of researchers reveal that the fossil represents “the first record of an amphibious whale for the whole Pacific Ocean.”

The researchers have dubbed the species, which was previously unknown to scientists, Peregocetus pacificus, or “the travelling whale that reached the Pacific Ocean.” Peregocetus is likely the oldest four-legged whale ever found in the Americas and “the most complete outside India and Pakistan,” Olivier Lambert, lead study author and a vertebrate paleontologist at the Royal Belgian Institute of Natural Sciences, says in a Natural History Museum statement.

Because the fossil was unusually well preserved, scientists were able to observe a number of features adapted for life both on land and in the water. Peregocetus had a long snout and sharp teeth, which suggests it was snacking on bony fish. The excavation team did not uncover the whale’s last vertebrae, so they do not know if it had a fluke—the paddle-like appendage that modern whales use for propulsion. But Peregocetus was likely a powerful swimmer.
Read more: https://www.smithsonianmag.com/smart-news/how-did-whales-reach-americas-four-legged-fossil-offers-new-clues-180971887/#T9CzbGiseVc2VYZC.99
Give the gift of Smithsonian magazine for only $12! http://bit.ly/1cGUiGv
Follow us: @SmithsonianMag on Twitter
MÁS INFORMACIÓN
Publicado por Andaray en 19:51