New species of human discovered in a cave in the Philippines 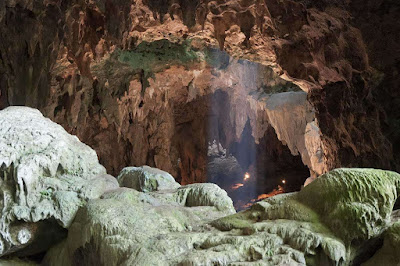 https://www.newscientist.com/article/mg24232253-900-new-species-of-human-discovered-in-a-cave-in-the-philippines/
IN CALLAO cave on the island of Luzon in the Philippines, history may be repeating itself. About 16 years ago, archaeologists working on the relatively nearby island of Flores discovered the remains of a previously unknown ancient human species.

Now a different team says Luzon was once home to a mysterious human species that it has named Homo luzonensis. The discovery raises an obvious question: did further human species evolve on other islands in the region?

The first signs of ancient humans on Luzon came in 2007, when a team co-led by Florent Détroit at the French National Museum of Natural History and Armand Salvador Mijares at the University of the Philippines discovered a 67,000-year-old human foot bone.

They tentatively assigned it to our species, but by 2016 there were rumours that Détroit and Mijares had found more fossils and that they looked too primitive to belong to Homo sapiens.

Now we have confirmation. The team has found 12 more fossils: seven teeth, two finger bones, two toe bones and part of a thigh bone. Some of the teeth have been dated as 50,000 years old.

This means the fossils are roughly the same age as some of the “hobbit” human remains found about 3000 kilometres to the south on Flores in 2003. But the Luzon fossils have distinct features and so belong to a different species, according to Détroit and Mijares.

Détroit says it isn’t yet possible to know whether this species was small in stature like the Homo floresiensis hobbits because there are so few fossils. But William Jungers at Stony Brook University in New York says that the teeth are extraordinarily small, “even in comparison to small-bodied populations of modern humans from the Philippines”.

Assuming H. luzonensis is accepted as valid, attention will turn to its ancestry. As with the hobbits on Flores, there are two leading possibilities: either it evolved from a relatively advanced species of human such as Homo erectus, which we know once lived in south-eastern Asia, or it descended directly from an ancient hominin similar to Lucy (Australopithecus afarensis).

The second option is controversial because this species is so far known only from Africa. But it can’t be dismissed: the hand and foot bones of both H. luzonensis and H. floresiensis are notably similar to those of Australopithecus.

The new discovery is likely to intensify the hunt for more extinct human species on nearby islands. Many researchers suspect that ancient humans lacked the ability to build boats and cross seas on a whim. They suggest it is more likely that early humans reached islands like Luzon and Flores by accident – perhaps after individuals living along coasts were washed out to sea during storms and deposited on a distant shore.

Thomas Leppard at Florida State University favours this idea. It would fit the notion that the human remains on Luzon and Flores belong to different species. If early humans were routinely building boats and crossing between the islands of south-eastern Asia, it is difficult to see how populations on relatively nearby islands could become genetically isolated long enough to evolve into new species.

So, it is possible that small groups of humans might have been accidentally deposited on other islands in the region and – isolated from the rest of humanity – evolved into new species.