What to do if your flight is canceled 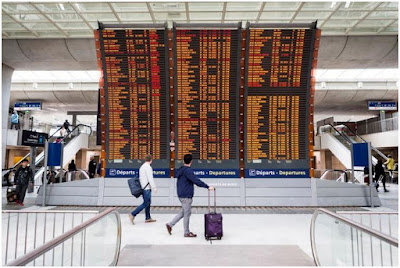 Flight cancellations occur all the time for all sorts of reasons. Some are due to aircraft maintenance or technical issues. Others are simply the result of bad weather. Perhaps worst of all? Those that are both unexpected and widespread, such as the March 28, 2019, collapse of Iceland-based low-cost carrier WOW Air, which stranded passengers across Europe and North America.

This type of situation may seem dire, especially if you’re already mid-trip and far from home. But don’t panic; if your flights or travel plans are canceled by unforeseen events, you do have several potential options for getting home and getting a refund.
Look out for rescue fares

In the latest incident involving WOW Air, Icelandair immediately offered forsaken travelers fares of $60 between Iceland and Europe or $100 between Iceland and North America to help them get home within about two weeks of the collapse. Among other airlines coming to the rescue in this case were Aer Lingus, Norwegian Air, Wizz Air, and Virgin Atlantic.

Redeeming miles can be a challenge, but one of the instances in which they’re the most useful (and valuable) is for last-minute award tickets. While airlines usually raise fares exponentially as the departure date approaches, they also tend to release unsold seats for award redemptions. If you are sitting on a stock of unused miles, this might be the time to use them.

Capitalize on your credit card

When you charge your ticket to a credit card and your flight is later canceled, you can pursue one of two strategies to get your money back.

If you haven’t yet paid the credit card bill containing the airfare, you can file a dispute with the card issuer and place the charge on hold until the situation is settled. That way, the amount will not go on your balance or affect your credit score.

If you have already paid for your ticket and don’t believe the airline will issue a refund, you can ask your credit card company for a chargeback—a refund given by the card rather than the merchant. Credit card companies will sometimes grant them when a vendor fails to deliver the goods or services promised. Chargebacks are handled on a case-by-case basis and can be difficult to secure.

Many travel insurance policies provide coverage when a travel supplier ceases operations due to financial circumstances or insolvency. If you have such a policy, double check its terms to see what types of conditions are covered.

For example, the Chase Sapphire Preferred will reimburse cardholders up to $10,000 per trip for pre-paid and nonrefundable expenses including passenger fares, tours, and hotels. The circumstances in which this coverage kicks in include accidents, injuries, loss of life, severe weather, and financial insolvency of a travel agency, tour operator, or travel supplier like an airline. Before you purchase airline tickets, check the travel protection benefits of your various credit cards and then use the one with the broadest coverage and highest reimbursement rates.

If your flight was to, from, or within the European Union, you have yet another option. In 2004 the EU established Flight Compensation Regulation 261/2004, which requires airlines to compensate passengers (€250 to €600, depending on the flight distance) for delays of more than three hours, cancellations, or denied boarding due to overbooking.

Claims like this, however, can take a long time to file and resolve, so don’t expect compensation to come through quickly. There are also several exceptions, such as when passengers are notified of a cancellation at least two weeks prior to departure, or if the cancellation is caused by extraordinary and unavoidable circumstances.

Some of these solutions may be time-consuming, but don’t give up. Know your rights, be patient yet persistent, and stay in contact with the airline and your credit card company. And look for the bright side. A flight cancellation may give you just the excuse you need to take that extended vacation.