Hummingbirds Learn to Count to Find Their Favorite Flowers 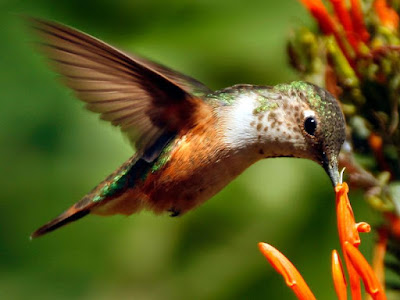 New research suggests that wild hummingbirds can keep count as they forage and use their counts to keep track of the sweetest flowers. The new paper, published on July 8 in the Proceedings of the Royal Society B, found that male rufous hummingbirds can learn which fake flower in a sequence holds a nectar-like syrup. Only one flower in ten held syrup. But even when the researchers moved the location of the artificial flowers and the distances between them, scientists observed the birds returning to the syrup-filled flower.

“They would never lose their car in the car park,” says biologist Susan Healy of the University of St. Andrews to Cathleen O’Grady at Science magazine. Hummingbirds join a growing club of animals that can understand sequences, which includes rats, guppies and monkeys. Last year, researchers showed that Emory University showed that dogs use a brain region for number processing that’s analogous to the region used by humans, Katherine Wu wrote for Smithsonian last December.

The new research is unique because it focuses on counting ability in the wild, rather than in a lab. Rufous hummingbirds are only about three inches long, and the males are red with pink throats. “And they are cranky little guys—aggressive eaters, they terrorize [local birds in Colorado], like meeker black-chinned hummingbirds, at feeding stations,” Peter Burke writes in 5280 magazine. That territoriality made them the perfect candidates for the study.

In Alberta, Canada, biologist Tas Vámos, now at the Victoria University of Wellington, set up artificial flowers—yellow foam disks around a small tube filled with sugar water—in hummingbird territory just before the birds migrated there for the summer. After several males established territories around different foam flowers, the training began.

The scientists replaced the single fake flower with a line of ten. Only the first flower, the one closest to the original, contained sugar water. The hummingbirds began to recognize that only that flower contained food, and even when the line of fake flowers moved, they recognized the first one in the line and went there for food the majority of the time.

Once the birds learned to eat from flower number one, the sugar water was moved to the second flower and the training began again. The scientists waited for the birds to learn to go to the second flower, then began shifting the location of the line of blooms, and still the birds went to flower two. The process was repeated for the third and fourth spots in the line-up of fake flowers.

To take into account the fact that the birds might be picking a flower for food based on distance from the first flower, instead of the number of blooms apart, the final stage of the experiment had the line of flowers spaced apart differently. Sometimes the fake flowers crowded together and sometimes spread apart. But still, the hummingbirds made their way to the fourth flower.

The birds made mistakes at times, sometimes probing the empty fake flowers on either side of the one that actually contained a treat. And when the birds reached level four of their training, they usually erred on the side of picking the third rather than the fifth flower. In the paper, the researchers suggest this may be because the third flower had held food in the past.

“It’s an ambitious study,” University of Tübingen neurobiologist Andreas Nieder tells Science magazine. The birds may have been using information other than counting to find the sweetest flower, Nieder says, and different birds might use different strategies.