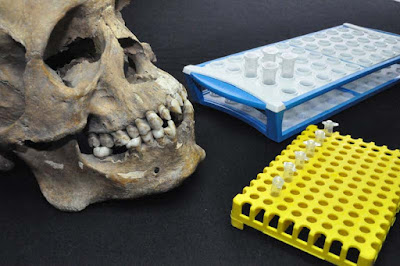 Viral and bacterial DNA found in the remains of three African slaves in Mexico suggests that the transatlantic slave trade may have introduced new infectious diseases into the Americas.

This discovery highlights the slave trade’s impact on the spread of diseases during the colonial period, between the 1500s and 1800s, says Rodrigo Barquera at the Max Planck Institute for the Science of Human History in Germany.

Barquera and his colleagues analysed the remains of people who were buried in a mass grave, first uncovered in the early 1990s, near the Royal Hospital of San José de los Naturales in what is now Mexico City. DNA and chemical analysis of the remains suggested three of the individuals were of African descent, rather than Native American, and showed that they were male.

Carbon dating of their skeletons revealed that they died soon after the start of the colonial period in Mexico, suggesting they were enslaved people, since slavery was the main way that Africans came to the region during this time. Their bones revealed skeletal changes consistent with intense labour and heavy manual activity as well as gunshot wounds and signs of malnutrition.

The researchers were able to extract viral and bacterial DNA from the teeth of all three individuals. They discovered DNA from the hepatitis B virus (HBV) and from bacteria responsible for a disease called yaws, which is similar to syphilis and was common in Mexico during the colonial period.

“We didn’t expect to recover genomes from such important pathogens,” says Barquera. “These are the earliest human remains in the Americas in which HBV and yaws have been identified so far, suggesting that the slave trade may have introduced these diseases into Latin America very early into the colonial period.”

DNA sequences from these pathogens revealed their close relationship to strains circulating in current West African populations, indicating that the three individuals probably contracted the diseases before they were forcefully brought to Mexico. “We only found evidence for these two pathogens, but it could be that other bacteria, parasites and viruses were introduced this way, such as yellow fever,” says Barquera.

Lucy van Dorp at University College London says these findings align with previous evidence suggesting that malaria may have spread to the Americas during the colonial period. “This work provides another example of how global movements of people, however mediated, play a really large role in spreading infectious diseases to other parts of the world,” she says.